If you love children, you’ll vote yes. Why wouldn’t you? If you are one of the less than 50% of the nation who actually votes, you wouldn’t want to seem as if you didn’t care about children would you? And you know something? That’s exactly what the state are banking on.

So why is it all a lie? Well apart from the obvious “you should never trust an Irish government with anything” logic there are plenty of reasons to be wary. A little known fact about Bunreacht na Heireann is that in Ireland, the family unit are the head of the state. To put that simply, in Ireland there is no greater power in society than the family. Families are higher up the ladder than 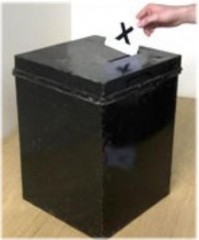 police, solicitors, judges and even the all powerful government. Article 41.1 states:

“The State recognises the Family as the natural primary and fundamental unit group of Society, and as a moral institution possessing inalienable and imprescriptible rights, antecedent and superior to all positive law.
2° The State, therefore, guarantees to protect the Family in its constitution and authority, as the necessary basis of social order and as indispensable to the welfare of the Nation and the State.“

If you vote yes in November, you’ll be surrendering the rights of the family unit, effectively making the constitution mere toilet paper. How?? Because if you remove the power of the family unit, you remove the head of the state. And who do you think will take that power? Oh come on, have a guess… ooh for you. That’s right. The government. But it doesn’t end there, there’s more. Article 42.4 states:

“The State shall provide for free primary education and shall endeavour to supplement and give reasonable aid to private and corporate educational initiative, and, when the public good requires it, provide other educational facilities or institutions with due regard, however, for the rights of parents, especially in the matter of religious and moral formation.“

That’s right, you guessed it. No more free primary education. OK ok, I know. Who the hell gets free primary education in this country? But it’s the law. Funny thing is, this is completely absent from the proposed amendments. Oh and did you know? Children already have rights in Ireland. The constitution is explicit in this. Article 42.5 states:

“In exceptional cases, where the parents for physical or moral reasons fail in their duty towards their children, the State as guardian of the common good, by appropriate means shall endeavour to supply the place of the parents, but always with due regard for the natural and imprescriptible rights of the child.“

Did you see that? It’s right there …. “the natural and imprescriptible rights of the child“. So why are you being asked to vote for something that already exists? That wording in there is important too. “By appropriate means” is to be replaced with “by proportionate means” which will actually remove children’s rights. I know, big words … complicated stuff eh? It means that the state is no longer required to fully see out its role as “guardian of the common good” and will now only cater for the child as long as budgets allow. Interesting isn’t it?

Now onto the changes regarding adoption. Why would we need this change? In short, we don’t. But why does Enda Kenny want this change? I’ll tell you. Currently in Ireland 90% of all children in state custody are with foster parents. A foster parent receives a lot of money from the state. €325 p/w for every single child 12 years or younger and €352 p/w for every single child over the age of 12. With current numbers stating that the state is currently taking care of 4500 children. That’s a lot of money. And with the Troika, the IMF and bondholders to be thinking of, how on earth can Enda Kenny allow Joan Burton to continue that mad give away?

So in steps that yolk, Francis Fitzgerald. A woman who in 1980’s Ballymun was famous in her role for splitting up families and taking children from parents. And guess what? She is seeking to constitutionalise that practise with adoptions now. After all, think how much money the state will save having your children adopted rather than fostered. And if forced adoption on it’s own doesn’t frighten you, I implore you to google Forced Adoption in the UK, where adoption is big business. Where adoption is quota based and generates bonus government payments to civil servants.

Now I would never dream of telling you how to cast your vote. Unlike the government I actually respect your right to vote and how you will do so. But it is damned well important that you research this particular referendum. And by research I do not mean watch RTE or listen to Newstalk. We are, after all, voting on the implicit rights of the family and children. And if you love children, then you had better be a responsible voter and actually KNOW what it is you’re voting on.

I could have taken the view, “this state has proven time and time again that when it is in charge of children’s health and welfare, it ALWAYS fails miserably” and I could have written about the sexual abuse, accidental deaths, manslaughter and suicides of children while in state care, but you already know all this. And you already know how many times the state has tried to cover up it’s involvement in such stories. But I wanted you to ask yourself only one question… “If I vote yes, will it really be the beginning of a better life for all Irish children?”

Another way of looking at it would be, remember all those pre-election promises that were all completely broken? No sorry, I can’t say that… they were not promises, they were lies. Well, do you think you can trust those same liars now? And if not, would it be responsible of you to allow the state the power of determining what’s best for your children? Personally, I wouldn’t trust them to run an ant farm. But I am only one voter. What you do is up to you, so please. Look into your child’s eyes and think before you decide.”

What is Really Going on in Europe?

5 Comments on What you should know about the Childrens Referendum