So we have reached the point where the Irish government is ineffectual and powerless in relation to the running for what is supposed to be our Democratic Republic of Ireland. What’s more, the parliament in the European Union is also powerless and ineffectual in relation to the drama is unfolding in Europe. Make no mistake about it, as we approach the end game of this financial disaster our real masters are those in the financial services industry and their media and political insiders.

The question that must be asked is how is it that we the people of Europe have allowed these people to get into such a powerful position, that they can dictate the lives and futures of hundreds of millions of citizens? We could scratch the surface and suggest that we gave away the power to our self-determination as a country to Europe, are when we voted for the Lisbon and proceeding treaties. But this would be just too simplistic.

You may read this and think ‘oh, here we go again another sideline commentator whingeing about the banks or the government or the EU or the markets and yet providing no concrete alternative to present course of action.’ To some degree you would be right but then again I and many commentators and observers can only discuss what we understand, unlike the clowns in government who simply pretend that they understand it all.

You see, like most people I am not a banker, an economist, a pension, hedge or investment fund manager, a member of the European commission, a captain of industry, a member of the elite Bilderberg group (Google it)  or indeed, a market trader. In other words, I like the majority of citizens of this country and the European Union are far removed from the levers of power whereas the aforementioned so-called “professionals” are the very people who pull all the levers.

The system as it presently is constituted is designed specifically to keep people like you and me as far away as possible from having any influence whatsoever. They have designed a system in such a way as to make it appear democratic yet, when we and many others disagree with how they are running (or ruining?) our lives, we are simply dismissed. We are told we do not understand. We are treated like ignorant uneducated people incapable of making rational decisions based on our own values, knowledge and beliefs. Their arrogance is staggering.

This group of people has become a very powerful Ruling Elite and if they get their way, they will become even more powerful, less democratic and increasingly more insidious in their contempt for the citizens whom they purport to represent or in whose interests they say they are acting. The harsh reality is that there is nobody at the heart of the system is actively working in your interests. The very best brains in the world are dedicated to continuing with a system has proven to have failed, in order to protect the interests and quality of life of a tiny minority at the expense of the substantial majority. 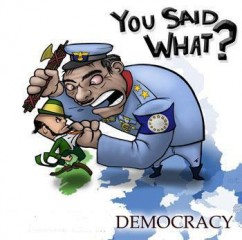 This Ruling Elite are among the most highly paid, privileged, highly educated and experienced professionals yet, they seem utterly incapable of finding any solution to the existing challenges in the financial markets. This can be a result of only one of two reasons. The first is that they are actually completely incompetent and had been so busy financially and raping the rest of us that they didn’t see it coming or more likely, it is that secondly, they know that if the system is to change in any substantive way, it is they who have the most to lose. I believe it is for this reason that we are continually lied to and fed the bullshit line that there is no alternative to the policies that they are now pursuing.

The Ruling Elite have a different set of rules under which they operate. These people spend every single day pursuing their own agenda, for their own personal financial enrichment or to feed their insatiable desire for control and power over the rest of us. You have to look no further for evidence of this than the fateful night in which Cowen and Lenihan agreed to bail out the banks, with your money.

The Chairman and CEO of both Bank of Ireland and Allied Irish Banks lied about the situation in their respective companies (go on, sue me!). They claimed that their companies were simply temporarily short of cash. A simple matter of liquidity, in bank speak. The actual reality is that their banks were in fact, bankrupt. You, your family and your children will pay for this lie for the next twenty years. Meanwhile those men and it is nearly always men, get away scot-free with huge pensions, golden handshakes or as is the case they are still in their job!

The fact that we here in Ireland are actually paying the debts of privately held companies on the grounds, we are told, that they are of such systemic importance that they cannot possibly be allowed to fail is, quite simply, the biggest lie ever foisted on this nation. We are supposed to be living in a free market economy but obviously that only applies to relatively poor people. If we were to put the people first and their long-term welfare at the heart of decision-making, there are a multitude of solutions which could be implemented which would serve the needs of us, the people.

Business Meetings in the Middle East

TD’s had better think before voting.

5 Comments on What is Really Going on in Europe?