Auctioning some of our Oil & Gas reserves could get us out of the present economic and social mess yet it has never been considered or discussed. No, we are just been fed the same bullshit i.e. that individual citizens have to bail out the Irish banks, which are failed privately owned companies, even though it was not their fault. Why ? 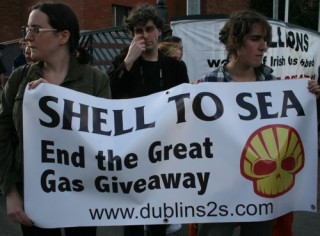 Vast quantities of gas and oil have been discovered under Irish waters in the Atlantic Ocean over the past 15 years. The Government’s figures put the value of these reserves at €420 billion (€420,000,000,000), but this is a very conservative estimate. The real figure is likely to be much higher, especially as the global price of oil and gas rises (see explanation below*).  If the Government wants to get out of the present economic crises, why not consider reneging on the deal with Shell that was formulated and agreed with former Government minister and convicted criminal Ray Burke ? Personally I believe that Shell have contemporaneous evidence of the ‘inducements’ that they gave to senior Fianna Fail members, in particular, CJ Haughy and that is why the deal has never been re-examined.

So what will the Government be spending these new-found riches on? The answer is: Nothing. This wealth will be leaving Ireland, thanks to a deal made between the corrupt Haughey government and multinational oil companies. Minister Ray Burke (later jailed for corruption) changed the law in 1987, reducing the State’s share in our offshore oil and gas from 50% to zero and abolishing royalties. In 1992, Minister Bertie Ahern reduced the tax rate for the profits made from the sale of these resources from 50% to 25%.

According to respected economist Colm Rapple, the amount of tax paid will be very low and will not be paid until many years into the operation of a gas or oil field, because the deal allows the companies to write off 100% of costs (even the anticipated cost of shutting down the operation!) before they declare the profits to be taxed (see www.colmrapple.com). In major oil/gas producing countries, the state takes an average (median) of 68% of the value of gas and oil.

While people in Ireland are suffering in a recession, being told to tighten their belts, to grin and bear the painful cuts to health, education and their dole, the pension levy, the giant oil companies of the world are preparing to remove Ireland’s valuable natural resources and divvy up the billions of euro of profits between their shareholders.

So the next time you hear a politician defending the Corrib Gas fiasco by mentioning the “national interest”, remember that Corrib actually represents a net loss to the Irish exchequer of tens of billions of euro.

One of the arguments you sometimes hear in defence of the Great Oil and Gas Giveaway has to do with “security of supply” – the idea that Ireland will be left without gas if the pipeline from Russia is cut off, and so we need to make it attractive for companies to bring gas ashore here. However, according to Bord Gais, “Ireland’s imported natural gas supplies are sourced from the North Sea. The possibility of gas supplies to Ireland from these sources being restricted is very remote.”
(See www.bordgais.ie/corporate)

And crucially, Ireland’s licensing law gives us no security of supply, because it allows the companies to export our gas rather than sell it to the Irish market.

A better deal  is possible

Even supporters of the Corrib Gas project rarely try to defend the outrageously generous terms of Ireland’s gas exploration laws in public. Instead they rely on the myth that the deal, once done, cannot now be changed. Nothing could be further from the truth.

The existing deal already allows Ireland to halt work on the Corrib Gas field. The licensing terms state: “The Minister may … require that specified exploration, exploitation, production or processing activities should cease … in any case where the Minister is satisfied that it is desirable to do so in order to reduce the risk of injury to the person … or damage to property or the environment.”

In fact, there is a worldwide trend of governments reclaiming ownership of privatised gas and oil reserves. In 2006 in Russia, the state-owned Gazprom took back control from Shell of the largest integrated oil and gas field in the world, Sakhalin-2, after Shell was accused of breaking environmental laws.

Bolivia nationalised its entire gas industry in 2006. At first, the reactions from the corporations and international markets in both cases were furious, with dire warnings given about how the countries would suffer from lost investment. But these warnings came to nothing: in the end the oil giants simply went along with these changes when they realised there were still enormous profits to be made.

There are many examples of successful nationalised oil and gas industries. Norway is one of the best examples of state-controlled extraction of gas and oil. Ironically, a significant chunk of the Corrib Gas profits will benefit the Norwegian people through Statoil, as it is majority-owned by the Norwegian government and has a 36% stake in Corrib.

Venezuela has begun nationalising the industry within the past two years. Most Venezuelans lived in degrading poverty throughout the 20th century, while enormous revenues from oil and gas went to foreign companies and a tiny Venezuelan elite. The government has redirected oil wealth into public spending, bringing health, education and dignity to the poor.

Even if Ireland’s gas and oil fields were not nationalised, hundreds of billions of euro could be raised if Ireland took a similar share in its own gas to that which applies in other countries.

*The figures in detail.

€420 billion is a lot of money. However, the true value of Ireland’s gas and oil is probably much higher. The figure is based on the estimate, issued by the Department of Communications, Energy & Natural Resources (DCENR) in 2006, that the amount of gas and oil in the Rockall and Porcupine basins, off Ireland’s west coast, is 10 BBOE (billion barrels of oil equivalent). Based on the average price of a barrel of oil for 2009 of $60, this works out at $600 billion, or €420 billion. If/when oil eventually returns to the $147/barrel record price of two years ago, it would value the reserves at over Eur100,000,000,000,000 (one trillion).  This does not take account of further oil and gas reserves off Ireland’s south coast. The total volume of oil and gas which rightfully belongs to Ireland could be significantly higher. The DCENR has also published much higher estimates at various times. Also, as the global price of oil and gas rises in the coming years, the value of these Irish natural resources will rise further.

3 Comments on The National Debt solution is in our back yard.