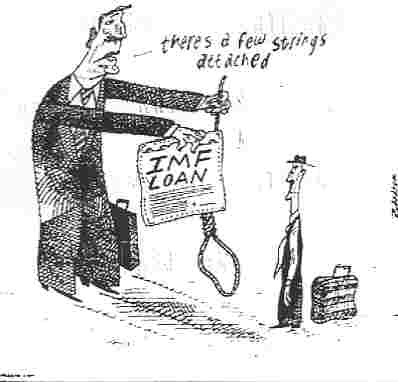 A superb article by Johann Hari on the real intentions of the IMF and how it gets it’s pound of flesh. Eamonn

Sometimes, the most revealing aspect of the shrieking babble of the 24/7 news agenda is the silence. Often the most important facts are hiding beneath the noise, unmentioned and undiscussed.

So the fact that Dominique Strauss-Kahn, the former head of the International Monetary Fund (IMF), is facing trial for allegedly raping a maid in a New York hotel room is – rightly – big news. But imagine a prominent figure was charged not with raping a maid, but starving her to death, along with her children, her parents, and thousands of other people. That is what the IMF has done to innocent people in the recent past. That is what it will do again, unless we transform it beyond all recognition. But that is left in the silence.

To understand this story, you have to reel back to the birth of the IMF. In 1944, the countries that were poised to win the Second World War gathered in a hotel in rural New Hampshire to divvy up the spoils. With a few honourable exceptions, like the great British economist John Maynard Keynes, the negotiators were determined to do one thing. They wanted to build a global financial system that ensured they received the lion’s share of the planet’s money and resources. They set up a series of institutions designed for that purpose – and so the IMF was delivered into the world.

The IMF’s official job sounds simple and attractive. It is supposedly there to ensure poor countries don’t fall into debt, and if they do, to lift them out with loans and economic expertise. It is presented as the poor world’s best friend and guardian. But beyond the rhetoric, the IMF was designed to be dominated by a handful of rich countries – and, more specifically, by their bankers and financial speculators. The IMF works in their interests, every step of the way.

Let’s look at how this plays out on the ground. In the 1990s, the small country of Malawi in south-eastern Africa was facing severe economic problems after enduring one of the worst HIV-AIDS epidemics in the world and surviving a horrific dictatorship. They had to ask the IMF for help. If the IMF has acted in its official role, it would have given loans and guided the country to develop in the same way that Britain and the US and every other successful country had developed – by protecting its infant industries, subsidising its farmers, and investing in the education and health of its people.

That’s what an institution that was concerned with ordinary people – and accountable to them – would look like. But the IMF did something very different. They said they would only give assistance if Malawi agreed to the ‘structural adjustments’ the IMF demanded. They ordered Malawi to sell off almost everything the state owned to private companies and speculators, and to slash spending on the population. They demanded they stop subsidising fertilizer, even though it was the only thing that made it possible for farmers – most of the population – to grow anything in the country’s feeble and depleted soil. They told them to prioritise giving money to international bankers over giving money to the Malawian people.

So when in 2001 the IMF found out the Malawian government had built up large stockpiles of grain in case there was a crop failure, they ordered them to sell it off to private companies at once. They told Malawi to get their priorities straight by using the proceeds to pay off a loan from a large bank the IMF had told them to take out in the first place, at a 56 per cent annual rate of interest. The Malawian president protested and said this was dangerous. But he had little choice. The grain was sold. The banks were paid.

The next year, the crops failed. The Malawian government had almost nothing to hand out. The starving population was reduced to eating the bark off the trees, and any rats they could capture. The BBC described it as Malawi’s “worst ever famine.” There had been a much worse crop failure in 1991-2, but there was no famine because then the government had grain stocks to distribute. So at least a thousand innocent people starved to death.

At the height of the starvation, the IMF suspended $47m in aid, because the government had ‘slowed’ in implementing the marketeering ‘reforms’ that had led to the disaster. ActionAid, the leading provider of help on the ground, conducted an autopsy into the famine. They concluded that the IMF “bears responsibility for the disaster.”

Then, in the starved wreckage, Malawi did something poor countries are not supposed to do. They told the IMF to get out. Suddenly free to answer to their own people rather than foreign bankers, Malawi disregarded all the IMF’s ‘advice’, and brought back subsidies for the fertiliser, along with a range of other services to ordinary people. Within two years, the country was transformed from being a beggar to being so abundant they were supplying food aid to Uganda and Zimbabwe.

The Malawian famine should have been a distant warning cry for you and me. Subordinating the interests of ordinary people to bankers and speculators caused starvation there. Within a few years, it had crashed the global economy for us all.

In the history of the IMF, this story isn’t an exception: it is the rule. The organisation takes over poor countries, promising it has medicine that will cure them – and then pours poison down their throats. Whenever I travel across the poor parts of the world I see the scars from IMF ‘structural adjustments’ everywhere, from Peru to Ethiopia. Whole countries have collapsed after being IMF-ed up – most famously Argentina and Thailand in the 1990s.

Look at some of the organisation’s greatest hits. In Kenya, the IMF insisted the government introduce fees to see the doctor – so the number of women seeking help or advice on STDs fell by 65 per cent, in one of the countries worst affected by AIDS in the world.

In Ghana, the IMF insisted the government introduce fees for going to school – and the number of rural families who could afford to send their kids crashed by two-thirds. In Zambia, the IMF insisted they slash health spending – and the number of babies who died doubled. Amazingly enough, it turns out that shovelling your country’s money to foreign bankers, rather than your own people, isn’t a great development strategy.

The Nobel Prize winning economist Joseph Stiglitz worked closely with the IMF for over a decade, until he quit and became a whistle-blower. He told me a few years ago: “When the IMF arrives in a country, they are interested in only one thing. How do we make sure the banks and financial institutions are paid?… It is the IMF that keeps the [financial] speculators in business. They’re not interested in development, or what helps a country to get out of poverty.”

Some people call the IMF “inconsistent”, because the institution supports huge state-funded bank bailouts in the rich world, while demanding an end to almost all state funding in the poor world. But that’s only an inconsistency if you are thinking about the realm of intellectual ideas, rather than raw economic interests. In every situation, the IMF does what will get more money to bankers and speculators. If rich governments will hand banks money for nothing in “bailouts”, great. If poor countries can be forced to hand banks money in extortionate “repayments”, great. It’s absolutely consistent.

Some people claim that Strauss-Kahn was a “reformer” who changed the IMF after he took over in 2009. Certainly, there was a shift in rhetoric – but detailed study by Dr Daniela Gabor of the University of the West of England has shown that the substance is business-as-usual.

Look, for example, at Hungary. After the 2008 crash, the IMF lauded them for keeping to their original deficit target by slashing public services. The horrified Hungarian people responded by kicking the government out, and choosing a party that promised to make the banks pay for the crisis they had created. They introduced a 0.7 per cent levy on the banks (four times higher than anywhere else). The IMF went crazy. They said this was “highly distortive” for banking activity – unlike the bailouts, of course – and shrieked that it would cause the banks to flee from the country. The IMF shut down their entire Hungary programme to intimidate them.

But the collapse predicted by the IMF didn’t happen. Hungary kept on pursuing sensible moderate measures, instead of punishing the population. They imposed taxes on the hugely profitable sectors of retail, energy and telecoms, and took funds from private pensions to pay the deficit. The IMF shrieked at every step, and demanded cuts for ordinary Hungarians instead. It was the same old agenda, with the same old threats. Strauss-Kahn did the same in almost all the poor countries where the IMF operated, from El Salvador to Pakistan to Ethiopia, where big cuts in subsidies for ordinary people have been imposed. Plenty have been intimidated into harming their own interests. The US-based think tank the Center for Economic and Policy Research found 31 of 41 IMF agreements require ‘pro-cyclical’ macroeconomic policies – pushing them further into recession.

It is not only Strauss-Kahn who should be on trial. It is the institution he has been running. There’s an inane debate in the press about who should be the next head of the IMF, as if we were discussing who should run the local Milk Board. But if we took the idea of human equality seriously, and remembered all the people who have been impoverished, starved and killed by this institution, we would be discussing the establishment of a Truth and Reconciliation Commission – and how to disband the IMF entirely and start again.

If Strauss-Kahn is guilty, I suspect I know how it happened. He must have mistaken the maid for a poor country in financial trouble. Heads of the IMF have, after all, been allowed to rape them with impunity for years.

* Johann presents a weekly podcast on the crucial issues of the week, which you can subscribe to here.

* The main groups monitoring and exposing the IMF are War on Want and the Bretton Woods Project.

1 Comment on The IMF itself should be on trial