In his recent article published in The Guardian newspaper, the acclaimed journalist and author Mr. Will Hutton suggests that part of the solution to the crisis would involve a situation whereby “…Central banks should inject money into their financial systems by offering to buy new bank loans made to support new investment, new innovation or new infrastructure – helped by partial government guarantees”.  I fundamentally disagree with him and all the other ‘solve a debt crisis with more debt’ proponents. I have some radical proposals that people need to start considering and lets start a real conversation and challenge accepted ‘wisdom’.

It is obvious to everyone who takes their head out of the sand and looks at the horrific reality and total unfairness of the financial system, that we the people have been screwed. The system has failed us. The governments are elected by the people and are expected to serve the needs of our society. 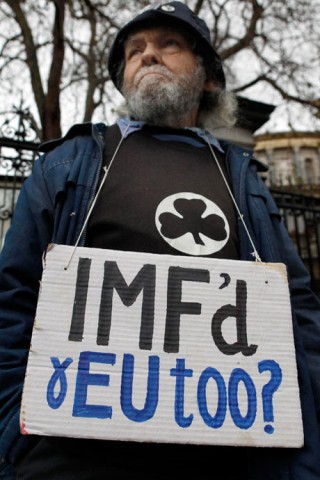 They have failed consistently to do so. People should at the very least expect to have a certain degree of stability in their lives. They should live in the expectation, that if they work hard they will be rewarded for their efforts and as importantly, keep the wealth they have created, not have it destroyed by the total incompetence of those charged with administering the financial system.

You will probably be sent to jail if caught stealing to feed your family but, through the sleight of hand of ‘distributed responsibility’, the privileged lifestyle enjoyed by members of the financial services (?), are allowed to continue even after destroying a countries economy and the lives of millions within it. This is morally and ethically indefensible.

The solution to our problems will not be based on another adaptation of the existing system but by taking courageous actions and designing a totally new system that serves the people, not just those who we have entrusted to administer it.  Among other ideas I have, the following would be a start;

1. The free markets must be free e.g. the banks must be allowed to fail and their losses absorbed by the very people who benefited from their profits. This means that both depositors (capped) and shareholders take the losses and NOT individual citizens, who in the majority of cases, have nothing left to give and more importantly, have absolutely no moral obligation to pay.

I don’t recall a time when the profits of the banks being taxed at 100%, and the money being distributed amongst the people, so why should their debts? Preventing a collapse of a system that doesn’t work is neither a good enough defence nor justification.

2. The present system whereby private ‘for profit’ companies (banks) are permitted to create money, literally out of nothing, must be stopped immediately.  Their sole objective is to create as much debt as possible, as quickly as possible, as it is the interest on this debt that makes them richer. Their motives are totally misaligned with those of the society in which they operate.

3. All states should have their own national banks (not for profit) which serve the needs of the populace in the normal course of economic activity i.e. chequeing accounts, credit cards, asset backed loans, depositing and issuing cash/coinage etc. and leave speculative loans to investment banks, outlaw personal guarantees and make all loans ‘non recourse’.

4. As a society we should introduce a system whereby individuals are limited in their capacity to accumulate wealth. I would suggest that a cap of no more than 1,500 time the average industrial wage. In Ireland this would equate approximately €50 Million.

After this level, all income would be taxed at 100%.  If an individual doesn’t like the system, let them bugger off to a much less equitable society. Oh yeah, if they intend to become tax exiles, make them surrender their passport on the way out.

5. The financial system as presently constituted, with the creation of the money supply in private hands, only serves to redistribute wealth upwards towards those who control the means of production. The very real effect is that people are getting poorer.  Forty years ago a single salary of an unskilled person was sufficient to purchase a house, now the salary of two skilled educated people, over twice the loan time frame, cannot.

6. It is time to get real. Two billion people on the planet will go hungry tonight. The majority of western societies are living a hand to mouth existence, with the constant fear of being unable to pay debts they were practically forced to take.

The increase in clinical depression and suicide, the abysmal standard of care in the hospitals, the degradation of the education system and the failure to engage in problems at a societal level are a damning indictment on the failure of our present system of governance.

7. Introduce a cap on the earning capacity of all non investment banks i.e. a sustainable percentage return on equity in the region of 15% per annum and a meaningful financial transaction tax of 1%.  This would allow a substantial return but at the same time remove any incentive to be reckless.

Banks should be seen in the same investment category as they were in the past i.e. solid returns from a boring steadfast business and not a slot machine with the odds set by the owners.  Let investment only banks, risk their own capital not our deposits.

8. Introduce twenty incremental income tax rates instead of the present two, starting at 5% of income and increasing to 100%.

9. Ireland, Spain, Italy, Portugal and Greece (and any others who wish to join us) should leave the Euro zone and introduce our own common currency, valued about 20% below the current Euro value. This will give us the purchasing power of a trading block with more consumers than the USA, massively increase our competitiveness with the original Euro zone countries and make the recovery considerably faster.

10. As it cost the banks zero to ‘invent’ the money they lent, they will have to accept that there will have to be massive debt write-offs. They are/were in the risk business and as difficult as it may for them to grasp, you can’t win them all ! When the bank charges you interest, it contains a ‘risk premium’. They are supposed to use this to hedge against losses, they didn’t,

The bottom line is, either we choose to fundamentally change the system and start planning for it now, or it will continue with the boom and bust cycles and in the process, make ordinary people poorer. As governments are made up of people who are good at getting elected and generally bugger all else, least of all understanding economics, I have no faith that they have the courage to do what must be done.

Therefore, I predict that the entire financial edifice as we know it will totally and systemically collapse before the end of 2014. As for the personal consequences of this, you really really do not want to know.

Please comment on and share this article (by clicking on the icons) below. We all need to engage in the conversation and the sooner the better, as time is quickly running out. Thank you.

The solution to this crisis is in our hands – Sunday Independent

2 Comments on Radical Proposals, Not More Of The Same Financial Guff