I write as a leading international Businessman, Litigant & Campaigner – for Justice and against bank crime / regulatory capture / government collusion.

As I have previously done for Victims of RBS GRG misconduct; by leaking the full FCA S166 Report, I now do the same for Lloyds / Bank of Scotland Victims by presenting the Full Unredacted Project Lord Turnbull Report into Lloyds / HBoS CRIMINAL ACTIONS.

This is my Gift to all victims of bank crimes & their families…and also to all Lloyds investors indeed all Lloyds stakeholders.
Lets not forget that overseas investors have participated in the Rights Issue and the buying & selling of Lloyds shares so the EU should now scrutinise this matter and Donald Trump should have a field day by having US Federal & State Prosecutors & Regulators look at this matter from a USA perspective.

Given that UK “Parliamentary lawyers” are stopping this report being published under parliamentary privilege (which has few restrictions as that is the whole point of it) or in the House of Commons library or through the Treasury Select Committee I DO NOT Believe that this Report will actually ever be allowed to be published by Lloyds Banking Group whilst colluding with HM Treasury officials – who are now in a “bunker mentality”…therefore yet again I resort to “Bruteforcing” the process of publication.

As a Whistleblower I have previously made all my declarations to City of London Police / FCA / SFO as a prescribed person qualifying under the PIDA 1998 Act. I take this latest action in the Public Interest indeed in the National Interest of my country – Great Britain.

All my actions are focused on the pursuit of Justice & Compensation for ALL Victims of RBS & Lloyds banks – the 2 State bailed out, State majority owned, State Regulated banks – to the extent that through HM Treasury this is effectively State Sponsored Financial Terrorism.

There is a direct read across / correlation to RBS GRG as had the RBS GRG S166 Report not been Sabotaged and made into a sophisticated Whitewash (already been completely deconstructed & exposed by Mark Bannister & myself) then it should have read something like this report…for this Report exposes CRIMINAL misconduct by Lloyds / HBoS bank managers and then a COVER UP by previous Chairmen & CEO’s and by the CURRENT Chairman & CEO – both of whom must now RESIGN and be treated as bad leavers without any “golden goodbyes”.

A £ 40 Billion black hole in Lloyds balance sheet has been covered up, a £ 14 Billion loss to shareholders has been denied until now, rather then a few million the real estimate of damages for HBoS Reading victims alone is £ 1 Billion and a £ 11 million instance of money laundering was not reported to the Regulator.
But then the Report states that the FSA ( now FCA) was complicit in part, mislead in part and ineffective in part. This report destroys KPMG for multiple Criminal activities and Deloitte, PWC & HMT are exposed too…

Theresa May as current UK Prime Minister must now take action by authorising 2 Public Inquiries into both RBS & Lloyds past & present Management & Misconduct, sanctioning full-scale NCA / SFO investigations into both Lloyds & RBS Criminality and must seek to have both the current RBS & Lloyds Chairman & CEO replaced.

In Good Faith – God Bless all victims of HM Treasury driven Bank Crime – their days of reckoning has come.

See for yourself the summary of the report’s findings below. 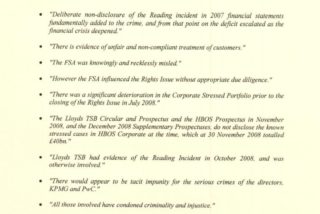