A new survey of Irish people who have recently returned from abroad, conducted by Crosscare Migrant Project found that reintegrating into Irish society after a period of emigration was a bigger challenge than many expected, with one-in-five citing it as a significant challenge.

Eamonn Blaney – Mature student, Moved to Oman in 2011; returned to Ireland in January 2015

Eamonn Blaney from Howth in Co Dublin was chief executive of a quarrying company based in Muscat, before returning to Ireland, encouraged by what he calls “the alleged economic recovery”.

Things were not as he had hoped, however. “Coming back to Ireland was like walking into a parallel universe where people’s quality of life was absolutely atrocious and yet the majority seemed resigned to this,” he says.

“I did not have a job to come back to and have since made approximately 300 job applications, for both senior and very junior posts, all to no avail. It is for these reasons that I decided to return to education and am presently completing a degree in digital technology.”

Without a permanent job, Blaney says he “found it impossible to find accommodation”, and without an address there were further obstacles in his way. “If you are a refugee or migrant, you can get the gardai to give you a form to say that you are resident at a given address. This facility, however, is not extended to Irish citizens. Consequently, opening a bank account or registering with the department of social protection took months.”

There was an upside to being back in Ireland, however. “Thanks to social media, coming back home was an absolute joy, and reconnecting with old friends and family was fantastic. After all, that’s what home is all about.”

Blaney has undoubtedly experienced the tougher side to returning to Ireland, and he feels that people are not sympathetic to his plight. “This is a difficult country to live in for anybody, unless they have a substantial amount of money or very little debt. The gap between the haves and the have-nots appears to have widened considerably.”

But despite the difficulties he is having on his return, he is glad he took the opportunity to work in Oman. “Living abroad was probably one of the best decisions I ever made. At times it was difficult and certainly lonely but I got to see so much and meet so many wonderful people from different cultures. I would seriously consider returning to the Middle East. There is a sense of hope, vibrancy and belief that everything is possible, and this is something which sadly, I do not see in Ireland.” 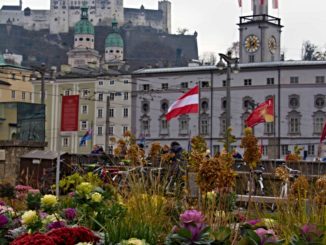 200 years of ‘Silent Night’ in Salzburg