Hi and welcome back! Would you believe it is a year since I penned my last article? I hope you find it both interesting and informative. Comments (and Shares!) are very welcome.

Last week, I had the pleasure of visiting the Greek island of Rhodes. Through the power of Facebook, I had arranged to meet up with a local journalist & guide Lola Fontain, who offered to show me around the island and discuss the effects of the economic collapse.

On the surface the Greek islands look just like they always have, stunningly beautiful, very peaceful and tranquil. But when you scratch beneath the surface it becomes very obvious that things are not as they seem. The austerity measures the Greek government had imposed have caused untold hardship to the 120,000 people who live on Rhodes. The average public servants salary is now around €300 per month. Young people are taking jobs for as little as €200 a month just to have a foot in the door, so they may have employment if and when the economy picks up.

When I strolled in one of the ancient parks in the Old Town I could not help but notice that the pathways were covered in weeds and untrimmed shrubbery. This is a visual sign of austerity but there are little reminders everywhere. You notice the bald tyres on at lot of cars, the shopkeeper standing at the door way for over an hour and not meeting one customer, waiters practically fighting for your custom and petrol at over two Euros per liter. This is austerity.

I ask about the health service and am told that every person who enters a hospital or doctor’s surgery in the public or private sector is expected to place a good sum of money into the open pocket of the doctors or nurses treating them. Failure to do so means you may not get the treatment you require or end up at the back of the queue. In many cases the front line staff in both schools and hospitals have not been paid in over six months. This is austerity.

You should not be under any illusion whatsoever that given the provisions of the Treaty that you’re being asked to vote on, on the 31st of May, Ireland will experience the same or worse conditions as Greece. The simple reason is we owe considerably more collectively as a country (€1,032,720,000,000 made up of sovereign, bank, commercial & private debt, Q4 2011) and per head of population (€206,544) than Greece (€484Bn or €44,952/capita). 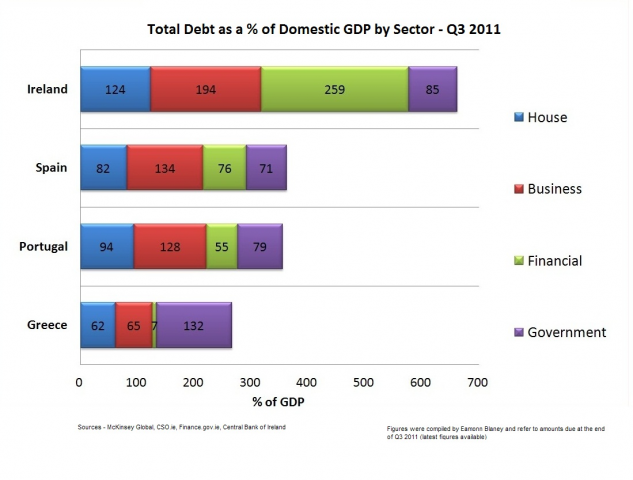 In order to pay the interest alone on that debt we would need a growth rate of approximately 6% per year. This is impossible now and for the foreseeable future. Therefore, it is a mathematical certainty that we will require either writing off the bank debt or we will continue to go further and further into the red and be declared bankrupt under the provisions of the Treaty.

So, why then have we spent (and borrowed!) €62,000,000,000 of our children’s future earnings, on paying off the private debts (of the bank owners, bond holders and investors) to ‘protect’ our ‘international reputation’? Now, in the heat of the referendum, the Government tells us that the very same banks (or ‘markets’) will not lend us any money should we need it in the future. So much for our sacred International Reputation! More scare tactics. With the bank debt written off we would have no trouble borrowing on the open market.

After borrowing such an unimaginable sum of money surely we should be safe in the knowledge that banks that WE bailed out will be happy to lend to us? Well, no actually. Even though we gave them the money, obviously it never occurred to anybody within the government to ask these banks for a guarantee that they would be willing to lend to us again, should it be required.

The fact is that if the Euro collapses German exports will be approximately 40% (Frances +30%) more expensive than they are now and this would decimate the German economy. This is the reason Germany is doing everything and anything to take total control of the European Union.

I believe the only way out now is for massive debt write off and for the peripheral regions of Europe to leave the euro zone, albeit temporarily, and introduce a common Euro2 Currency, worth about 25% less than the present Euro. If this were to be adopted, it would mean that the countries which become party to this new currency would have a marketplace of approximately 250,000,000 people who share this currency and it would enable the rebuilding of these countries’ economies through massively increased competitiveness and and effective 25% reduction in our Foreign / bank  debt. . This economic rebuilding and consolidation would take less time and cause significantly less human hardship than the austerity plan presently being put forward by the European Union and our own government.

Maybe it’s all nonsense, this economic carry on. Maybe getting ready for a communion or confirmation, following the soccer or rugby, keeping an eye on ‘Strictly’ or Corrie or just going out and getting lamped, are far more important to the majority. What the children will say, when they grow up and realise what an unmitigated disaster that we collectively made of their nation, only time will tell. Suffice to say, they will be sickened that we let it happen, through our own inaction and simple ‘couldn’t give a fiddlers’ attitude.

While I fully support a democratically accountable Europe Union and recognize the importance of balancing ‘the national books’, I am vehemently opposed to the Treaty as it is simply bad for the Country in the immediate term and for the generations to come.