Why the public outcry over what will be the ‘most draconian’ budget in the history of the State ? The reason I ask is assuming that it does make it through the Dail vote all that it will have achieved is getting an additional €4 Billion into our public piggy bank. ‘ €4 billion, that’s an enormous amount of additional revenue” ? I hear you cry. It is enormous but it is not nearly enough. Unfortunately, since I pointed out in a previous posting (economic-civil-war-revisited )  the actual amount of our debt has increased by a further €8 Billion, simply because the Government did not act back in February when they knew the scale of the problem. If that’s not bad enough, next years spending will  increase by an additional €5 Billion compared to this year ! 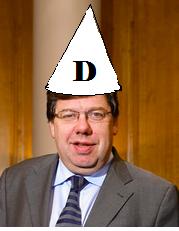 Simply unbelievable, but unfortunately true. Consequently, even after the ‘mother of all budgets’ we will be spending even more next year than we did this year, while taking in less revenue. Jesus H Christ, but it does not take a feck’en genius to work out that this is simply not sustainable, in even the economic short term.  We need bold courageous decisions to be taken without hesitation and we, as a nation of fair minded intelligent people,  can understand the necessity and take the pain . But what we cannot nor indeed will not accept is any further incompetence or lack of national leadership..

As much as I like and respect Mr Brian Cowen as an individual it has become exceedingly obvious that he is incapable of providing leadership at a national level. Mr. Cowen’s strengths are best demonstrated when he is dealing with small numbers of people i.e. his Fianna Fail parties members, the Cabinet, his constituents or small groups of the unelected (by the people) union representatives.

I and many like me, could take €3,000,000,000 out of the public service wage bill never mind €1,300,000,000, in an Act! For a start, before we even discuss work practices (which we’ll leave for another day), you cut the salaries of any public servant who earns more than the average industrial wage (€36,000). If they have a problem with that, then they are always free to compete with the rest of us for one of the extremely scarce jobs in the private sector. What has me apoplectic with rage is that this small group of unelected individuals, the leaders of the public service unions, who represent a minority of the total workforce in this country, have hijacked our government and in the process have been given the opportunity to make their demands a priority over the needs of the rest of society. This is not just immoral, it is practically criminal. I acknowledge that there are a lot of hard-working, dedicated badly paid public servants but they too must also acknowledge that there is a very large number of incompetent, complacent and overpaid public servants.

Who has been representing the 400,000 people on social welfare at these talks, 160,000 of whom have lost their jobs in the last year due to  government incompetence? Who has been representing the SME sector who are hanging on by their fingertips just to stay in business, as the banks continuously refuse them essential working capital while simultaneously being bailed out for tens of billions of euro by the rest of us? I would like to know just how many man hours of senior executive government employee time has been spent listening to the totally unrealistic demands of the public services unions.

What if the entire SME sector decided to go on a one-day strike? What if all our manufacturing plants and farmers decided to go on a one-day strike?  It may not be a bad idea just to let those in the  service of the public realise that they are incredibly fortunate to have the job security that they do, the benefits that they get and oh yeah, the fact that it is us in the private sector who are their employers. I would strongly advise the unions to be very careful that they do not bite the hand that feeds them. The people who provide the goods and services in this country are reaching breaking point. They are witnessing everything that they have worked for over the years being taken from them and in the majority of cases, they are entitled to absolutely nothing from the state, specifically because they are self-employed. These are the people who took out second mortgages on their homes to open or to expand their businesses. These are the people who risked everything they own so as to create wealth for both themselves, their employees and the country.

You see, this is far more important than Mr Cowen’s ego and that of his colleagues in Fianna Fail, this is about the future economic well-being of the citizens of this country and in particular the young. Himself and Mr Lenihan may have demonstrated their skills as practitioners of law but this never gave them the skills required to run an organisation as large and as complex as this country and its public service. Why do they have such a problem admitting this when the evidence is so obvious? As the French mathematician and philosopher Blaise Pascal (yes, him!) observed in 1640 “We must learn our limits. We are all something, but none of us are everything”. I and thousand’s like me, who are presently on social welfare, trying against the odds to set up a business or trying to keep their business’ going, are eminently more qualified to run this Country than the present bunch of morons. We know the value of a Euro and have worked for scores of days for no pay, year in and year out!

Furthermore, I am getting sick and tired of hearing just how reasonable and competent Mr Lenihan is as Minister for Finance. The majority of his erstwhile supporters are businessmen and bankers who know that he will protect them regardless of the effect on the rest of society. No disrespect Mr Lenihan  but you have changed the rules regarding NAMA on about four occasions and  are obviously making this up as you go along, no doubt heeding the advice of those closest to you, which I guarantee you are not people representing the vast majority of this society. As the laws regarding deformation and slander are somewhat complex, I won’t even mention the head of Muppetry,  Mary Coughlan.

The bottom line is, this government is simply moving chairs on the deck of the Titanic while the rest of us sink beneath the waves of economic hardship. The Captain, the First Mate and Chief Purser are in no hurry as the know that their ‘public service pension’  lifeboat will be there for them. Assuming they don’t sail on to Europe instead.

We the people of this Sovereign Nation demand our right to a Government worthy of the title.

Election 2014, who actually gives a damn?