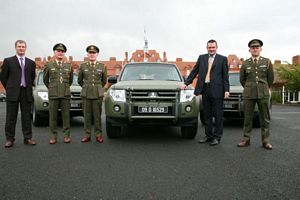 Great news. The old Nissan Patrols were getting a bit worse for ware and given some of the very difficult missions that the army must engage in, the new Mitsubishi’s are no doubt very welcome. Mind you, the majority will probably spend their time on CIT (cash in transit) duties where a much more suitable and cheaper vehicle would suffice. None are expected to be used overseas before the end of 2010.

In these times of reducing revenues for the Government it is somewhat questionable whether or not we really need to spend €10,000,000 of taxpayers money on their acquisition. Especially, as this is the same amount that is required to keep open the ward in Crumlins Children’s Hospital. Somehow, I think if the people had a choice the new vehicles could wait a year or two.

As well as the cost of the initial purchase price there will no doubt be an additional cost in relation to the purchase of spare parts and  training of maintenance personnel. The really, really incredulous part of this change over from Nissan’s to Mitsubishi 4×4’s is that all Army personnel, who are licensed to drive the existing Nissan’s, must undergo a compulsory one hour  ‘familiarisation’ course before they are allowed to drive the new 4×4’s! And you wonder where your taxes go ?

Mind you, this pales into insignificance compared  to the undefined, open ended amount of your taxes that will be a requirement of a ratified Lisbon under which the (unelected) European Defence Agency will decide what it considers sufficient to “improve the military capability of each state“. This provision in the Treaty is mandatory not optional. That’s right, if we vote yes to Lisbon we will be required to significantly increase spending on the Irish Defence Forces. Do you think that in the years ahead that we have better things to spend our taxes on ?

If you find this hard to believe please, have a read of the treaty.